The housing market is currently facing a supply shortage. According to data from Knight Frank, there are currently a quarter fewer properties being listed for sale on the market in England and Wales in March 2021 compared to the previous year.

Why is this happening? Which area is the mainly impacted? And what does this mean for the future of the housing market?

What does the data show?

The data from Knight Frank shows property listings are down 25% compared to the previous year. Houses have taken the biggest hit, with the number of listings dropping 33% over the last 12 months. The number of flat listings is actually 7% higher in the same 12-month period.

The drop in house listings is more apparent in the parts of the country which experienced higher demand as a result of the various lockdowns.

For example, south-west England has experienced a 42% drop in listings. Areas which experienced less demand previously are naturally the least affected, with London only seeing a 3% drop.

Why is this happening?

With flats actually increasing in listings, it can be assumed this is due to a change in people’s priorities. As a result of lockdown, more people are realising the importance of having space at home, both internally and externally.

This change in priorities will mean people are moving out of their flats and looking for a house, resulting in an increase in flat listings and a decrease in house listings, as the best ones are getting snapped up.

It’s also likely that London has seen the lowest drop in listings as there are a large number of flats in London, meaning a lot of these are being listed on the market.

Also, as a result of the pandemic, people have realised they’re able to work from home and no longer have a need to live in a commutable distance from work. This realisation has led to more people moving away from London, meaning more people listing their properties for sale in this area, making it less hit by the listings drop.

Knight Frank believes part of the problem is in relation to the first two months of the year, with the agency stating ‘January and February were marked by uncertainty over new Covid variants, and the vaccination programme was in its early stages. On top of that, many parents were home-schooling. All of which meant new sellers were reluctant to list their property and we are seeing the effects of that now.

‘When demand escalated sharply in March, supported by the original stamp duty deadline at the end of the month, the best properties sold relatively quickly.

‘As those properties went under offer, sellers hesitated as they were unable to find anywhere to move into themselves, exacerbating the supply shortage and putting upwards pressure on prices’.

What does the future hold?

Knight Frank believe the imbalance will correct itself, with the number of market valuation appraisals rising, as you can see in the chart below. 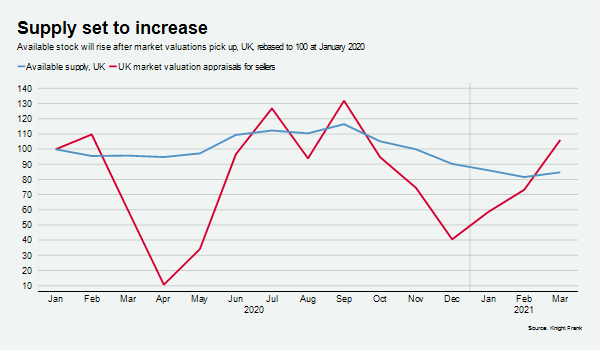 Appraisals take place when the owner wants to know the market price of their property before listing and is used as a leading indicator of supply.

The number of appraisals in March 2021 was higher than the level seen in January 2020 for the first time in six months.

This suggests that soon we will see some downwards pressure on house prices, with the supply looking likely to increase. This looks to be good news as house prices have risen considerably, with the implementation of the stamp duty holiday causing a noticeable change.

An increased supply will mean a more balanced housing market, which is good news for those looking to move, with the expectation that supply may finally be able to meet the growing demand.

Millie is a perfectionist with a passion for property and writing articles. You’ll find her researching the latest housing trends and the newest up and coming areas worth investing in.

About Millie Archer 115 Articles
Millie is a perfectionist with a passion for property and writing articles. You'll find her researching the latest housing trends and the newest up and coming areas worth investing in.